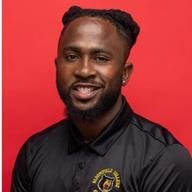 I was raised in a small family and community that lives and breathes soccer, so I’ve been playing soccer pretty much all of my life.

My first championship I won was with my high school team back in Jamaica (Jamaica College) at the U-14 level; after that we won U-17 and U-19 both the league and the knockout cups. I also got the chance to represent my national team (Jamaica) on the U-20 level.

After high school I earned a full athletic scholarship at NJCAA D1 school ASA College where I played a crucial part in the team for two years. We won the NJCAA regional and district championships in my freshman year. After my two years at ASA college I then earned another athletic scholarship for a NCAA D2 school Bloomfield College where I played for two years and will graduate with a double major bachelor’s degree in May 2022.

I am currently an assistant coach at Bloomfield College; this coming Fall season will be my second season as an assistant coach there. My prior experience in coaching soccer to that, is coaching at FC Real Madrid clinics that is usually active in the summer and also countless one-on-one and group practice sessions.

Soccer played an important part in my childhood when it comes to fun, interacting with others, developing skills but most importantly, my development as a person. It is crucial for me to re-create this environment for my players, so I focus my coaching on being fun, interactive, skills development and personal development focused. With that being said, I coach in a competitive manner because I also like to win trophies!